Were we looking for a winery?

Everyone asks us this question and no, the truth is that we weren’t. We were looking to preserve a very special piece of land. Special to us, because our family has been coming to this unique little corner of paradise for decades. When we heard it was up for sale, we worried that someone else without connections to Saturna might buy it for its commercial or development value alone. When we look at this land, we see cliffs, goats, raptors, otters, mink and, yes, vineyards filled with generations of memories-not just for our family but for our friends and neighbours who make up the whole Saturna community.

Don’t get us wrong, we are very passionate about wine and have assembled an elite team that shares our values about excellence in farming, wine making and working with nature. The truth is that with its unique maritime soil and heat reflective cliffs this property delivers incredibly high quality and unique coastal wines. 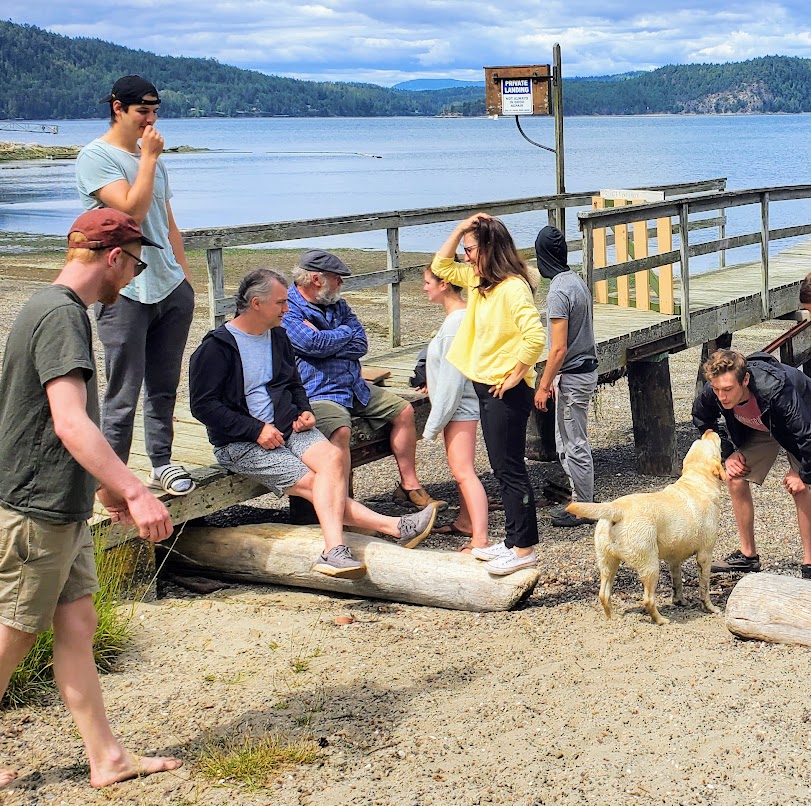 When we took over, the vineyards had been left fallow for nearly a decade.  The original winery ceased operations in 2012 and the vines, left to their own devices, had sprawled over the trellises and down into the rows.  Native plants filled in any space the vines left available, from delicate Queen Anne’s Lace to horrendous thickets of bramble, as the unintended rewilding progressed.

There was a glimmer of hope, though: one of the four fields had been largely reclaimed.  Sea Star Wineries on neighbouring Pender Island had purchased the property in 2017 and hired Tyler Cox to remediate the vineyards.  He concentrated his efforts on Falcon Ridge field, planted primarily with Pinot noir, and tamed the chaotic tangle with armaments like a flail mower mounted with heavy chains and a steel-toothed hedge trimmer.  But before he was able to complete the Herculean task, circumstances forced Sea Star to list the property.

We ventured into the vines before we put in an offer.  Tyler showed us the ropes and we started suckering in the late July heat, pushing past heavily armed blackberry vines and thistles to reach the base of each trunk and chop off its untidy nest of shoots.  The prospect of restoring the property to its former glory shimmered before us.  We already loved the place, but now as we spent time in the fields we felt something else – a mission, maybe?  A responsibility?  Would any other buyer see what we saw and dream what we dreamt?

We decided to move to the next level.  Tyler introduced us to Michael Bartier (Bartier Bros. Vineyard & Winery in Oliver, BC), whose philosophy is to farm your vineyard as a 200-year project, take good fruit into the cellar, and make sure the terroir – not the winemaker’s manipulations – ends up in your glass.  Feeling we had met a kindred spirit, we asked him to come to Saturna and help us make a decision about the property.  He spent hours walking through the fields, talking to Tyler, tabulating strengths and weaknesses, and troubleshooting what lay ahead.  His final, unforgettable words to us:  “I envy you the opportunity.”

We bit.  On August 12, 2020 we took over the reins.  And if we thought we knew very little going in, we quickly discovered we knew absolutely nothing!  But we wanted to learn, Tyler was willing to give us hands-on instruction, and Michael stayed on as a consultant to help us with, well, everything.  A whole world opened up for us as we started to tackle three different business initiatives simultaneously: a grape farm, a winery, and a bistro.  And in the process, each of us gravitated toward a particular orbit: the lawyer put on rain gear and headed out into the fields to prune, shoot thin, tie down, sucker and – most importantly – drive a tractor; the engineer maintains the equipment, manages renovation projects and – most importantly – drives the other tractor better than his brother; the business consultant keeps us on track with planning, organization, and decision-making that reflects our shared values; and the museum curator drafts website content.  Together we try to ensure we all have the most fun possible in any given endeavour.

Closed for the season, stay posted with our social media platforms for special events!